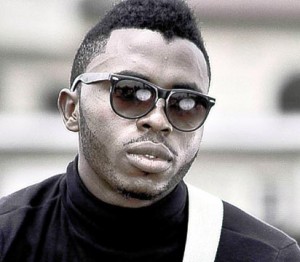 Producer & singer Samklef started way down from the bottom now see where he is. The producer in a recent interview talked about his music, personal life and lots more.

How does it feel being married?

Marriage has been a blessing because I got married to the right woman; I got married to my friend. Being married has taken me to the next level and I am glad I got married at the time I did. I used to be disorganized when I was not married; I lived in hotels when I had the money but marriage put a stop to all of that because I now spend my time and my money wisely. Now I have a home and I remember I lost my dad at the age of 11 and I became a rejected stone but I thank God for everything he has done in my life.

Why did you feature her in your recent video titled “Suwe”?

I featured her because of the title of the song; Suwe means game and my wife is my friend. What I do is showbiz and it is good you put your family in the eye of the viewer for positive reasons and not otherwise.

How did you meet her; was it a planned meeting?

Everything about my life is not planned; I didn’t plan meeting my wife. I met her in 2010 and we got married in 2011. I met her in front of her parent’s house and we got talking and what attracted me to her was her confidence. I was not really known as a popular producer at the time but I just had a name. We got close after that meeting and we got even closer to each other with time. She is my friend and we went through a lot together. Getting married to her is about the best decision I have made in my life.

You have no regrets whatsoever?

I have no regrets; I have developed a great deal and I am still relevant on the scene. After I got married a lot of people said I went quiet. I didn’t go quiet; I am still relevant as I have been working with various artistes. Marriage makes you peer ahead; I think of the future now and how I can remain at the top of what I do. Marriage has thought me how to manage and handle showbiz.

Is there any particular reason you featured Baba Suwe in the video?

When I penned lyrics for the song was the time when Baba Suwe was arrested for drug trafficking. I met with Olamide later on and we were putting lyrics together for the song and Olamide mentioned Baba Suwe and we thought it would be a good idea to have him in the video. The whole idea was further developed by Tiannah Styling’s and that was the reason why I gave her a mention on the video.

How much did you pay him to be on the video?

I wouldn’t like to disclose that to the public on the pages newspapers. That is between the two of us. He was free and lively on set and we all had a good time shooting the video.

You have produced songs for artistes such as Wizkid, Olamide, D Prince and a host of other established acts. Why is hard for you to produce a hit song for yourself since you also double as an artiste?

All I have been doing in the past was selling myself as a producer but it is a new era for me at the moment. I want to concentrate more on selling myself as an artiste. Besides, I started as an artiste; I just did the video for the song “Suwe” and people are surprised I could do that but first I did ‘The Rain’ where I showed my other skills. I have been showcasing my stuff because as a business man you need to sell your brand. I have come to discover that most producers don’t make money because there are no structures. A lot of producers will soon go broke because there are no structures; we need publishing companies that can help us get the money. Some artistes are making huge sums of money while producers are not making anything. I don’t blame artistes anyway because they are meant to give you what you are due by paying you your service charge. But when things are taken care of by a publishing company, then producers need not worry because they will get their due.

How would you describe your evolution on the music scene?

It has been mind blowing and what I did recently can be termed as spiritual. I am very spiritual; I believe everything that controls the physical is spiritual. I also believe in energy and frequency. Recent times have been like a rebirth for me because I collaborated with Terry G. A whole lot of people do not know that the first group I was part of was formed by Terry G. We used to do gospel music then; he later left the group to forge his own future while I was taking out time to discover myself at the time. It all started for me when I produced the hit song titled “My Life” for Durella. Skales heard about my expertise and he introduced me to EME where I did two songs for Wizkid titled “Tease Me” and “Don’t Dull”. I also organised the team that shot the video “Holla at you Boy”. So it is now a rebirth for me, I did a song titled “Display” with Terry G with whom I’ve surprisingly not been in a studio with until recently.

What’s next for you?

After my latest single “Display” I hope to drop another single very soon. I am also planning to shoot a video in America because I have been getting positive responses from fans. My album will be dropping soon and I am working towards its completion.

How have you been able to remain relevant on the scene despite that fact that the digital age has brought laziness and lack of discipline among most music producers?

How do you combine video production, music production and your music career?

I attended Air force primary school and later attended Tomori Comprehensive High School in Lagos. After leaving secondary school, I got enrolled into the street university where I had to forge a future for myself. I learnt everything I know today on the streets and I have a first class degree from the streets. I have never bought JAMB form my life and that doesn’t mean I am not educated.

Did you ever think you were going to make money from music?

I started making money when I was young because back then at the Air force base I used to get invitations to come and dance at birthday parties and I was given a token for my trouble. Music started for me when my dad died; I was lonely and sought things that could occupy my time. That was how I fell in love with music; I learnt to how to play the key board and later went to music school for one month.

How challenging is it to produce a hit song?

No song has been too challenging for me to produce; I don’t spend much time producing songs. The maximum time I have spent producing a beat is one hour. Sometimes I spend half an hour producing a song. I have not had to produce any challenging beat; I produced “Don’t Dull” by Wizkid under an hour.

When should we expect your album release?

My album is dropping between July and August…

How close are you to God?

God is my friend and my father; I talk to him as a friend. He is not a breed; I have a father and son like relationship with God. He knows what I am doing and he is in support of what I am do. The bible says the blessings of God added riches and added no sorrow.

What’s in the pipeline for you in the near future?

After my album release, I intend to embark on a European tour to promote my music next year. I am also working on a project for my son; it’s an animated super hero movie I am working on.

Have your worked with any international artiste?

I am working on something in that direction because I have friends trying to fix things for me over there. That will surely materialize when my tour begins in time soon to come.