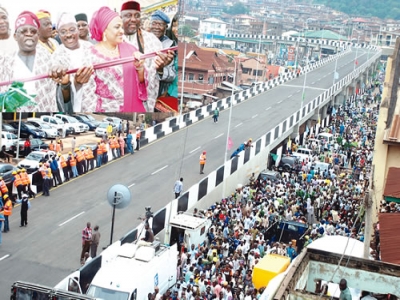 Action Congress of Nigeria (ACN) national leader, Senator Bola Ahmed Tinubu, has described past administrations of the Peoples Democratic Party (PDP) in the South-West states as  examples of bad leadership.

Tinubu spoke on Tuesday during the inauguration of Mokola Flyover and the Neighbourhood Market at the Scout Camp, Molete, Ibadan by the Oyo State Government.

While describing the former administration in Oyo State as “rotten and reactionary,” Tinubu likened the present governor of the state, Abiola Ajimobi to the Biblical Moses whom he said “is taking us from Egypt” adding, “The ship of Noah is ship of salvation.

“When we were campaigning, we asked the people not to be frustrated. We told them not to be disillusioned that help is one the way. Help is here now.”

On the recent spirited efforts by the opposition to take over the South-West, he said, “I read recently that some of them are collaborating. The old enemies, who chased themselves out of office with cudgels, cutlasses and guns, said they want to collaborate again. They failed before and they will fail again.”

He said attempts by the PDP and Accord Party to reclaim the state from ACN would fail, adding that he helped a former governor of the state to retain his position but was betrayed.

He said, “I helped him before, what did he do? He went back to his vomit.

He added, “We are not a government of share the money. The radical transformation of infrastructure will bring food to all, the petty sellers, the mechanic and so on.”

In his remarks, Governor Ajimobi said, “In the past, political officeholders failed in their responsibilities.

“The responsibility of a governor or officeholder is Herculean and should be given to a serious-minded person. We are standing on the threshold of history.

“We have built another bridge 35 years after the first bridge was built by the military. The construction of this bridge is a testimony that we desire good and robust life for our people.”