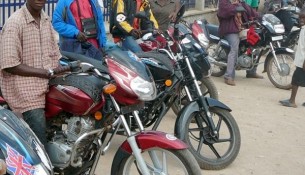 The Edo government on Sunday threatened to destroy commercial motorcycles or tricycles, popularly known as Keke NAPEP, that flouted the orders on their use.

Gov. Adams Oshiomhole, in a state broadcast, banned the use of motorcycles and tricycles in  major streets in five local government areas of the state.

The governor said the decision was painful but that it was in the overall security interest of the state adding that the ban took effect from midnight on Sunday.

Mr. Oshiomhole also barred private owners of motorcycles from using them within those areas.

The governor appealed to the residents to comply with the directives as security agencies had been mobilised to enforce the ban.

Mr. Oshiomhole said he had discussed alternative means of livelihood with the commercial motorcyclists but warned that the measures were for those in the state only.

According to him, the government does not want to make anyone to suffer but is determined to enforce the ban.

“I advise all bike riders to comply and keep off the road. Should any bike rider flout this order, he will be dealt with ruthlessly. The bike will be confiscated and destroyed.

“In the interest of our collective security, I ask you to appreciate that this is a sacrifice that you have to make. Everyone must make sacrifice and be security conscious.

“There will be time this issue will be resolved and everyone will be happy. Do not doubt our will to enforce this decision.

“Motorcycles will be destroyed on my orders. Keep out of the roads in the stated areas.

“I care about your welfare but we are not about to replace motor bike with Keke NAPEP. Please stay out of trouble.

“It is not my wish to visit hardship on anyone. It is my duty to provide security for the people of the state. Please respect this order,” Mr. Oshiomhole said. (NAN)