Tears are yet to dry on the faces of occupants of a 3-storey building which collapsed on Tuesday in Mushin area of Lagos State. 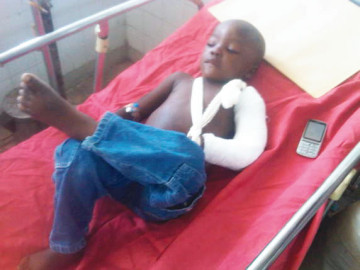 Two-and half-year-old Chibuzor was unaware of his miraculous survival as he played with his father’s mobile phone on a bed at the Critical Care Bay II of the Accident and Emergency Centre, Lagos University Teaching Hospital, Idi-Araba, Lagos.

At a point, he tugged the hand of our correspondent and smiled broadly when he was asked “How are you?”

The boy, whose parents were among the occupants of a 3-storey building that collapsed on Tuesday at 353, Agege Motor Road, Challenge Bus Stop, Mushin, Lagos, was found under the rubble of the collapsed building by sympathisers who thronged the premises after noticing what happened. Chibuzor’s fractured  left arm was covered in Plaster of Paris and has bruises on his head. A nine-month-old baby died in the incident while three others sustained injuries.

As the little Chibuzor innocently played away, his father, Uchenna Duru, wore a sober look as he answered questions from SUNDAY PUNCH.  Duru said the development had left him worried.

Duru, who sells building materials opposite the house, explained that his wife was in church with their other child when the building collapsed.

He said, “It was raining that Tuesday evening and I took Chibuzor to the house so that he would not catch cold. When I discovered that the rain was increasing, I decided go to my shop, pack the goods and return to stay with him since he was the only one at home. I was in the shop when at exactly ten minutes past two, there was a thunder and the next thing I heard was that the building had collapsed.”

He added that there was confusion everywhere as people tried to see what was happening. According to him, there was no way to know who survived or not because the place was rowdy.

“By the time I gained entry into the place, I was told that those who were pulled out of the rubble had been taken to a hospital. I went to the hospital but when I got there, I was told that a baby in diaper had died in the incident. It was when I got to LUTH where I was later referred to that I saw my son. I was heart-broken when I saw his state,” he said dejectedly.

Duru also said he moved into the building two months ago. He further stated that the medical expenses of taking care of the boy were going beyond what he could afford, especially as he had been directed to do a brain Computed Tomography scan for Chibuzor.

He added, “I have been directed to do a Brain CT scan for Chibuzor. Since the incident happened, my family has not been able to find a good place to sleep. I thank God for sparing the lives of all members of my family but I am right now worried about how to start all over again since our belongings were lost to the incident.”

Chibuzor’s mother, Tina, said she was told by her husband that one of his son’s arms was fractured.

She said, “My husband has been staying with our son in the hospital since the incident while I am taking care of the younger one. I want him to be healthy because he is our first child and I will not be able to stand it if the incident has any effect on him.”

A medical report seen by our correspondent showed that the baby needed an X-ray on his cervical spine, chest and left arm, which had been done already. The result of the X-ray conducted on his left arm indicated “an oblique fracture.”

Also, occupants of the building are still counting their losses. Many of them were in their workplaces when the incident occurred. One of them, Mrs. Bola Saheed, said she was yet to change her clothes since the building collapsed.

She stated that she left her house early on the day of the incident only to be called later in the day that the building had given way.  Saheed also said there had been constant disturbances from the person in charge of the property to evict some tenants in order to take in new ones.

Saheed said, “I have stayed in the house for eight years. The 3-storey building is part of two others inherited by children of the owner. The children share the rents among themselves. We recently heard that one of the children, Tunde Salami, who inherited the room I occupied, said he had not received rents from us for the past three years whereas we had been paying the person representing him.”

Mrs. Saheed disclosed that some of the occupants, including herself, had been issued notices to vacate their rooms this month, as there were plans to bring in new tenants.

Another occupant, who refused to disclose her name, lamented that despite their inability to salvage any of their belongings, an unidentified miscreant took advantage of the incident to steal a mobile phone.

She wondered how the unidentified thief could risk his life to go under the rubble in the guise of assisting rescue workers to steal one of the phones left in the house.

“Many of us were not at home when the building collapsed and that is why we were unable to retrieve anything from it. But when I was told what happened and I promptly came back home, I was surprised when I was told that one of the phones we left at home was picked by an unknown person. I called the number and to my surprise, it was picked by an individual who did not express remorse for his sin. I do not understand how any sane person can do that, ‘’ the lady said.

When SUNDAY PUNCH visited the site of the collapsed building, many passers-by were seen milling round the place to feast their eyes on what had become of the 3-storey building.

Besides, our correspondent gathered that occupants of the remaining two 3-storey building, also owned by the same person, are considering vacating them in apprehension of the state government’s decision because of their dilapidated state.