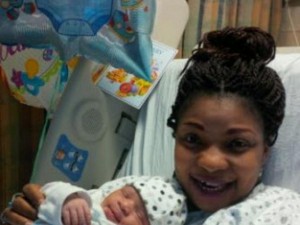 We broke the news to you a couple of days ago about the safe delivery of Yoruba actress, Laide Bakare’s baby in the USA.

Most of the actress’s fans were shocked and surprised at the delivery news. The reason for this was because just less than a month ago, Laide announced her marriage had ended with her ex-husband, Olumide Okunfulire  and weeks after a baby was born.

Worried by the development quick succession of events, her ex-husband has come forward to lay claim as the father of the child while actress Laide is claiming is for Tunde Oriowo; her new lover.

Olumide said, “I heard that my wife delivered a baby boy barely two months after she made a release that we were divorced, and she’s saying that the baby belongs to one Mr. Tunde Oriowo. “That’s a lie, wicked lie. I’m the biological father. I have pictures to show that we were always together, but she deliberately kept the pregnancy out of my knowledge.”

Olumide further stated that he isn’t just going to take Laide for her word, rather he’ll prove his case through a DNA test. Olumide also challenged Laide to submit herself for the DNA test in order to determine the paternity of the new child.

Classic story-line for a Nollywood movie!!!