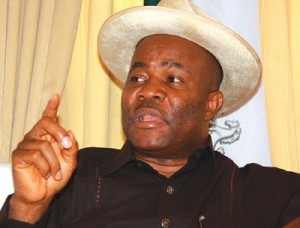 Governor of Akwa Ibom State, Godswill Akpabio has advised his colleagues especially those in the ruling Peoples’ Democratic Party, PDP, to show respect to President Goodluck Jonathan the same way they did during the short-lived administration of late President Umaru Musa Yar’Adua.

At the party’s National Exectuive Committee meeting held yesterday at the Banquet Hall of the Presidential Villa, Abuja, Akpabio, who is the Chairman of the PDP Governors’ Forum, recalled that PDP governors showed maximum respect to late Yar’adua, therefore, Jonathan “cannot be different.”

“When our late President Yar’Adua was in power, there was no single PDP governor that challenged him, either on the pages of newspaper or at any meeting. We even went to the extent of organising prayer for him and we supported all his policies; yours cannot be different.”

His comments appeared to have been targeted at governors, who lately have constituted themselves as stumbling blocks to Jonathan’s 2015 ambition.

Akpabio, who expressed appreciation to the President for his mid-term report, pledged not only his loyalty, but that of the entire PDPGF to Jonathan.

“Leadership comes from God and He gives it to whom He pleases. My assurance to you is that the 23 PDP governors are solidly behind you. We thank you for your mid-term report. We have keyed into your transformation agenda and we are saying ‘no shaking.’”