The Peoples Democratic Party national chairman, Bamanga Tukur, retained his seat Thursday at a crucial National Executive Committee meeting of the party where several officials resigned and new ones emerged, with a vote of confidence passed on President Goodluck Jonathan. 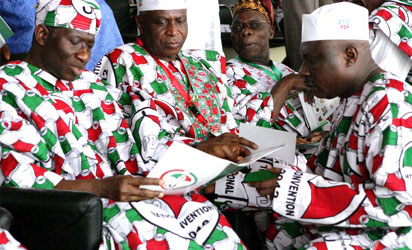 Former aviation minister and women leader for the party, Kema Chikwe, has also been replaced with Oyibo Nwaneri. The appointees are all in acting capacity.

The former exco members of the party announced their resignation shortly before they were excused from a closed-door session of the NEC on Thursday.

They were “elected” through a faulty process, the Independent National Electoral Commission said in a monitoring report in April.

Despite coming more than two months after the report’s release, the party insisted the resignations were in adherence of the electoral body’s directive.

After stepping down, they were thanked by senate president, David Mark and Cross River state governor, Liyel Imoke.

A special convention of the party is to hold July 15 where new elections will be conducted to fill in the more than 16 vacant positions.

In a speech ahead of the executive session, Mr. Jonathan said he wished there would be “two big political parties”, one which would be the PDP. He said the party is solid and has been helping to stabilize the country.