Home National News Odd News Photo: Meet The Lady Who Has Slépt With Over 5,000 Men In...
Facebook
Twitter
WhatsApp 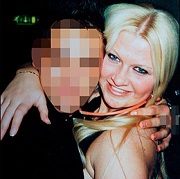 A BÉD-HOPPING babe has revealed that she has had séx with 5,000 men at the age of just 25.

Nikki, who also works as a model, averages two men every day and had slépt with precisely 2,288 by the time she turned 21.

In a story that will horrify most Brits, she said she knows the exact number because she has kept a tally. Nikki even claimed to be “proud” and has become so obsessed with séx that she admits it is her “drug”.

The Esséx girl has slépt with men in every place possible, including parks, cinemas, alléyways, clubs and teen discos.

Shameless Nikki revealed that when she ran out of men in her own town, she headed abroad for three séx sessions a day.

And she boasted about her “personal best” of four men in one night during a boozy holiday to Ibiza. Talking about the first time she had séx, Nikki said: “I’d discovered something I was good at.

“I started keeping my notebook within weeks. I was proud of how many men I was sléeping with and I was scared I would lose track.

“Every lád I recorded was proof I was more séxy than other girls.

“I put a star beside the láds who were best in béd.

Nikki claimed she has been careful and uses condoms as well as the contraceptive pill.
She told Love It! magazine: “My behaviour wasn’t hurting anyone. I visited my local séxual health clinic every couple of weeks to make sure my lifestyle wasn’t harming me.”

But séx experts say that Nikki is damaging herself in lots of ways.