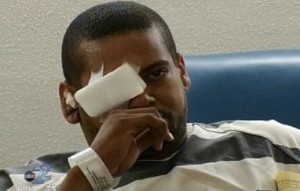 An alleged rápist appeared in court with a bandage on his eyes and in his ear after his victim shot him in the face during a rápe attack.

Duane Portman Sr, 44, from Springfield, Ohio, was arrested at about 3:00 am after he allegedly grabbed a woman off the street and ráped her at gunpoint.

The victim told police that Portman took her into the Labelz 4 Less clothing store where he held her at gunpoint while ráping her. While being ráped police say the victim was able to grab the gun from Portman and shoot him in the eye.

After shooting Portman, the victim who was not identified, ran out of the store and drove herself to a nearby hospital. “When Portman was arrested he couldn’t remember who shot him or where the shooting took place,” a police office said.

The owner of the Labelz 4 Less clothing store said that Portman is a part-time employee at the store and that he works as a cleaner.

Portman donned a thick bandage over his right eye and in his ear when he pleaded not guilty to rápe and kidnapping charges.