Three feminist activists from the radical protest group Femen staged a topless protest inside a Stockholm mosque on Saturday before they were led away by police. 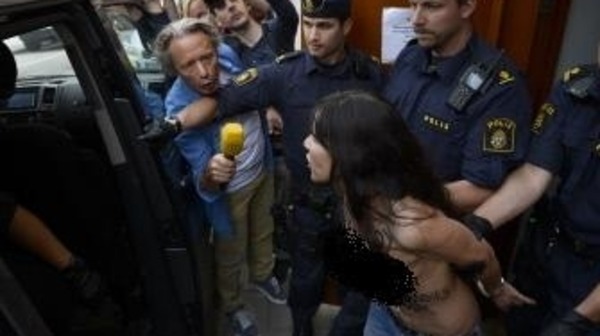 The women burst into the mosque and tore off their black robes to bare their breasts, which were emblazoned with slogans such as “No sharia in Egypt and the world” and “My body is mine, not somebody’s honour”.

The women shouted “Free Women”, “No Sharia” and “No Oppression”.

The mosque was largely empty at the time apart from a couple of employees and some members of the press who had been told of the planned protest in advance.

Mosque employees called police who removed the women from the scene. The women did not explain why they wanted to protest inside an empty mosque.

“They’re suspected of disorderly conduct and abuse,” police commander Jonas Svalin told reporters, saying that the mosque employees had accused the women of shoving them.

The women were reportedly from Egypt, Tunisia and Sweden, although police were not immediately able to confirm their identities or nationalities.

Founded in Ukraine in 2008, Femen is a self-declared “radical feminist” group known for its topless protests against sexual exploitation of women, sexism and religious institutions.