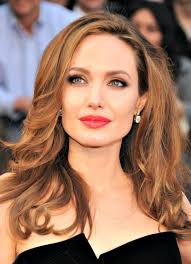 Angelina Jolie turned 38 on Tuesday, June 4, and the superstar celebrated an especially poignant birthday with her seven favorite people in Berlin: Brad Pitt and their children Maddox, 11, Pax, 8, Zahara, 8, Shiloh, 7 and twins Vivienne and Knox, 4. After Jolie joined Pitt, 49, on the week’s third red carpet event for his flick World War Z, the Oscar-winning actress changed out of a stunning Ralph & Russo strapless white crepe creation into another sexy look for an en masse dinner at Japanese eatery Kuchi.

Wearing a sleeveless black mini-dress, Jolie (who’s newly out and about after months of seclusion following a talked-about preventative double mastectomy) appeared in good spirits as the famous family headed into the restaurant for some birthday eats. Appearing all together for the first time in a while, the Jolie-Pitt children looked more grown up and transformed than ever: With Zahara wearing a glamorous pink Grecian-style dress and sandals, Shiloh in chic tomboy shorts, loafers and white shirt, and her little brother Knox looking like the spitting image of his father in an all-black casual suit.

Angelina Jolie celebrates her birthday with the whole family in Berlin on June 4, 2013.

One evening before, the couple of eight years had a private couple’s night out in Paris at Italian eatery Il Vino. “He’s such a wonderful man and a wonderful father,” Jolie told reporters over the weekend of Pitt, who stayed by her side during her lengthy recovery process. “I’m very, very lucky.”

Brad Pitt and Angelina Jolie leave the restaurant ”Kuchi” together with their kids in Berlin Mitte.

Pitt, for his part is “so proud of her,” he told Us in London. “She’s a badass. She’s just a badass.