HKN artiste, Danagog, was recently involved in a near fatal accident on his way back from Oshogbo, Osun state where the artist had gone to perform at Gbenga Adeyinka’s Laffmatazz on June 12. 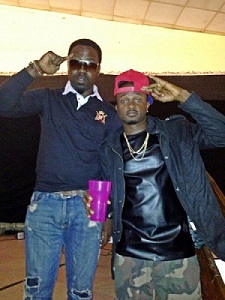 According to Danagog’s publicist, Michael Abimboye, the accident occurred around Gbobgon area of Osun state on the 13th of June when the artiste was returning to Lagos from osogbo when an oncoming vehicle which swerved onto the other lane, Danagog’s manager, Timi thr3e10, who was on the wheels had to swerve to avoid a head on collision and almost lost control before the car crashed into a nearby filling stations’ fence.

He also confirmed that both Danagog and his manger, Timi are safe as they are unhurt. Danagog who had been with the governor of Osun state,Ogbeni Rauf Aregbesola, along with Eniola Badmus (Gbogbo bigs girls),Boy Alinco,Omoba and Gbenga Adeyinka a day earlier, performed his track ‘Bobo ti Bobo’ to an amazed crowd at the Wodcif Centre in Oshogbo.