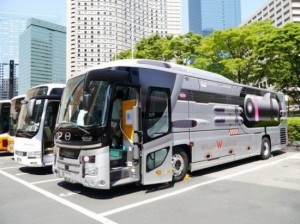 Long bus tours can be pretty boring, but Japan’s Star Fighter buses are so incredibly cool they just don’t give you a chance to get bored. If you think they look impressive on the outside, wait until you see what’s in store for passengers inside.

Going on a Tokyo bus tour usually gives tourists a chance to catch a glimpse of Japan’s fascinating metropolis, but that’s not what the Star Fighter Tour operated by Willer Travel is about. In fact, their futuristic-looking buses don’t even have windows. So if it’s sightseeing you want, look elsewhere, but if you fancy an interactive space adventure right here on Earth, this is one Tokyo attraction you don’t want to miss. As you can see in the photo below, Star Fighter buses don’t look like ordinary tour buses. Their shiny silver paint job  is somewhat reminiscent of Star Trek, but it’s just the tip of the iceberg, because the real exciting stuff is on the inside. As you step aboard, the space shuttle-themed decor makes it hard to tell if you’re on a bus or a ship ready for take-off. There are hatches on the floor and air locks on the walls, and the normal windows have been replaced with “Hyper Windows”, which are really LED screens that show the infinite space outside, as soon as the tour starts.

The seats are equipped with joysticks, not for maneuvering the Star Fighter bus, but for navigating through the menu displayed on the wide screens fitted in the back of the seat in front. As soon as the tour starts, after a short speech from the guide, the curtain between the driver’s seat and the rest of the bus is drawn and the space adventure begins. Colorful lights and LED screens come online and the passengers are briefed on their mission: “The year is 20XX. Humans have discovered the existence of a shining crystal body in the section of space around the planet Cocoon. Adventurers from all parts of the world have ventured out into space in search of this crystal. WILLER-X, a travel company of the future, has developed a new type of “Star Fighter” spaceships and has announced a series of treasure hunting tours to search for this mysterious crystal using these new spaceships.”

That basically means you have to take part in a series of video games and quizzes in order to complete the adventure. According to a reporter from RocketNews24 who got to go on a Star Fighter Tour, passengers who successfully finish all the games and quizzes get to take home a souvenir gift. But for everyone else, the experience alone is well worth the price of the ticket.