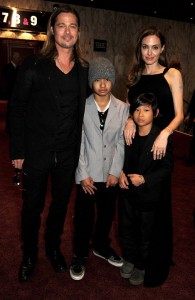 It was natural — albeit fairly rare — for Brad Pitt and Angelina Jolie to bring their two sons Maddox and Pax to the world premiere of their dad’s giant new summer movie “World War Z,” because he made the movie just for them. Pitt said at the CinemaCon convention back in April that he had been looking for a film project especially suited to their tastes. The Daily Mail quoted Pitt as saying, “I just wanted to do a film that my boys could see before they turned 18 – one that they would like, anyways. And they love a zombie.”

11-year-old Maddox and Pax, 9 — who previously only attended premieres for kid-friendly flicks like “Shark Tales” and “Kung Fu Panda 2” (though Maddox also accompanied his parents to the inspirational “Invictus”) — may be considered a bit young for the PG-13 action movie, which features hordes of rampaging zombies (in the U.K. where they saw it the movie is recommended for audiences age 15 and up). But at least they already know that Pitt makes it through the movie okay.

Right before showtime, the boys looked ready for the action when they posed for a quick photo inside the Empire Cinema with their famous parents. Pax was dressed in all black — just like his mom and dad. Meanwhile, Maddox looked pretty spiffy rocking a gray blazer and casually dangling his shades from the neck of his shirt. However, he also had on gray hat … perhaps to pull down over his eyes in case “WWZ” got too scary. 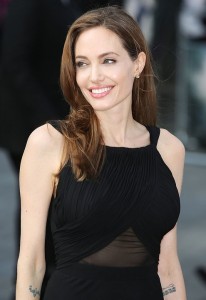 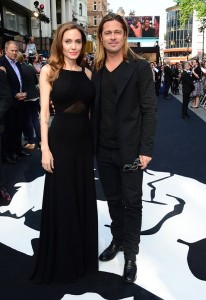