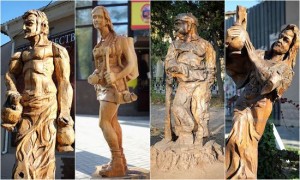 During the last six years the Ukrainian city of Simferopol has been transformed into an urban art gallery by a mysterious artist who carves wooden statues out of dead tree trunks. There are now dozens of these incredible works of art spread throughout the Crimean city.

Not many took notice when the first wooden masterpieces started showing up in various areas of Simferopol, but in time the city became filled with them, and people began wondering who was behind them? Was it the local authorities, a local art group or did the trees magically transform into detailed sculptures? There were all kinds of rumors going around, but local media was finally able to track down the “perpetrator”.

His name is Igor Dzheknavarov, and remarkably he’s not a trained sculptor or carpenter, but a cook. “Cooking is the biggest art of all,” he jokingly told surprised reporters. “If you can fry potatoes, you can do anything.” Ten years ago Igor taught himself how to sculpt, and at one point started using his newly discovered skill to improve the look of his city. He calls himself a co-artist, as all of his works are inspired by the unique lines and twists of the trees he carves.

Asked how he decides what to sculpt every time, the Simferopold artist said he has the same relationship with wood that Michelangelo had with marble. Just like he would look at a block of marble and know it was going to become Pieta or David, he knows what he is going to turn a tree trunk into the moment he sees it. He doesn’t know exactly how many urban sculptures he has created so far, as he also works on a number of private commissions at the same time, so it’s hard to tell. Dzheknavarov told Ukrainian media he spends up to two weeks working on a single piece.