A woman who stripped naked along with three of her children outside a high school has blamed the psychotic episode on an adverse reaction to medication she was taking. 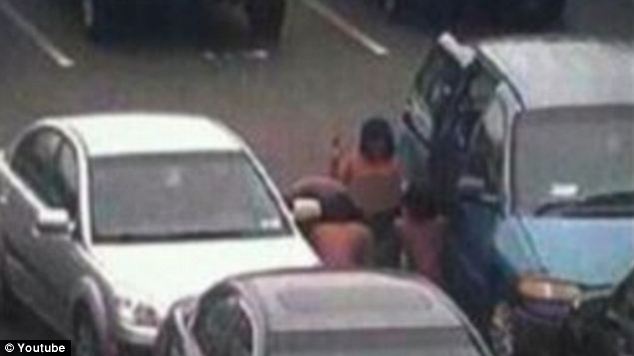 On the morning of March 16, Butler drove to Upper Darby High School with her two adult daughters, Joanne, 23, and Bessie, 22, plus a 14-year-old son.

She had wanted to pick up another child, but the student wasn’t released because – although Butler was the child’s biological mother – she was not the custodial parent.

During this psychotic episode, Miss Butler thought that basically the world was coming to an end, so she – caring for her family – decided to bring all of her children together,’ said her attorney Sharmil McKee.

School district security ordered the family off the property, but they returned three more times, reports Delco Times. The last came at about 1 p.m., when they arrived in a van and stripped between two parked vehicles in the parking lot.

‘In order to please the Lord, Miss Butler felt that she needed to exit the world in the same manner that Adam and Eve entered the world, and to do so she needed to be naked,’ said McKee.

‘When police got there, they were in a van and locked their arms in defiant protest,’ said Upper Darby police Superintendent Michael Chitwood.

‘They were chanting, “Jesus is Lord.” When we got them back to the police station we gave them their clothes and the mom refused to put her clothes on.’

Sara Butler does not have any underlying psychological problems and has never been in trouble with the law before, said McKee. She is currently seeing a therapist, who has discontinued the medication that triggered the episode.

McKee said the family had never seen their mother act that way before, but is now familiar with what a psychotic break looks like. All three women apologized and promised that the episode will not be repeated.

‘I regret what happened that day and it will never happen again,’ Sara Butler said.

Butler and her adult daughters pleaded guilty to indecent exposure and disorderly conduct, for which they each received one year of probation and were ordered to stay away from the high school.

Sara Butler also entered an open plea to simple assault and corrupting the morals of a minor, for which she was given a concurrent probationary sentence and ordered to pay a $500 fine.