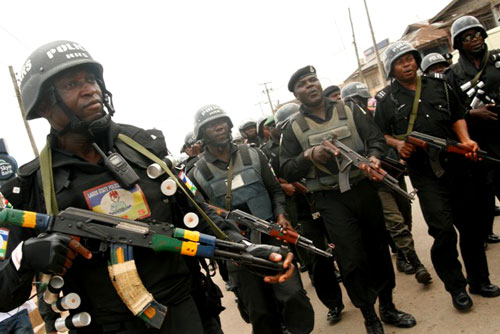 The Abia police command on Friday deployed its officers and men to parts of Abia in a show-of-force to demonstrate its readiness to quell any lawless acts on Saturday.

The team, comprising mainly of mobile policemen and women, drove round Umuahia and other areas in trucks, chanting songs.

The Movement for the Actualization of the Sovereign State of Biafra (MASSOB) had issued a sit-at-home order for Saturday to members of the public in the defunct eastern region.

The command’s spokesman, Geoffrey Ogbonna, explained that the command was poised to forestall any act that could threaten the peace and security of the state.

Mr. Ogbonna said that the show-of-force was also carried out in Aba, the economic hub of the state, as well as other major towns and villages.

He called on members of the public to disregard the MASSOB order and to go about their lawful businesses without any fear of molestation.

“We are on top of the situation,” he said, adding that officers and men of the command were on red alert and keeping 24-hour surveillance in all the nooks and crannies of Abia.

“The command warns MASSOB and any other group that would engage in any act capable of breaching the peace to stir clear as anyone caught would be made to face the full wrath of the law,” Mr. Ogbonna said.

Also speaking on the MASSOB order, the Special Adviser to Governor Theodore Orji on Security, Chris Osondu, described the agitation by the group as “unrealistic”.

Mr. Osondu advised the leadership of the group to work toward the unity and development of the country rather than dissipate its energy and resources pursuing an obsolete and unrealistic project. He urged residents of the state, market men and women, as well as shop owners to disregard the order and open for business on Saturday.

He gave the assurance that security agencies in the state would be alert to deal with any acts of lawlessness and criminality.