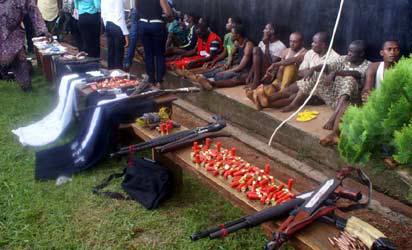 The Edo State Police Command Thursday paraded 36 suspects in connection with kidnapping, robbery and cultism in the state.

The suspects, who included cult leaders allegedly involved in the recent killing of students of the University of Benin, were arrested with cache of arms, including AK47 riffle, two AK 47 rifle magazines, 23 rounds of 7.62mm live ammunition, two Magnum pump action guns, one English-made cut to size double barrel gun and 107 live cartridges.

The state commissioner of police, Mr Foluso Adebanjo, while parading the suspects before Journalists, vowed to rid the state of criminal elements just as he solicited the cooperation of members of the public in giving useful information to the police.

Mr Adebanjo said the suspects were arrested in different locations in the state, adding that the kidnappers among them were involved in the abduction few weeks ago of some foreigners and members of the Nigeria Union of Teachers.

Speaking on the Okada ban in the state capital, the CP hailed the move saying about 90 per cent of crimes perpetrated in the state were carried out on motorcycles.

He added that the ban on Okada riders will help check the activities of criminals in the state.

In his words, “the ban on Okada is a very good thing and for security purposes. A lot of crimes being committed in Benin City are bike-related. They use bike to rob people, kill people and even cultists use bikes to operate.

“So we have no fear that the ban on Okada will increase crime, we are fully prepared to take care of that. These people arrested failed to heed to my earlier call that they should repent or face the fire power of the police. We are going to charge them to court. I am also advising others to repent or leave the state because we will not tolerate cultism, killings and robbery in Edo State.”