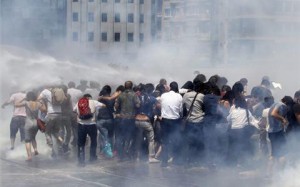 Police have yet again fired tear gas and used water cannon to disperse protesters in the Turkish capital as demonstrations against the government of Prime Minister Recep Tayyip Erdogan enters day 3.

Authorities said the measures were taken to stop around 1,000 protesters who were attempting to march to the high-security prime minister’s office on Sunday.

The protesters hurled stones and other items towards the police in Kizilay district while calling for the government to step down.

The demonstrations form the biggest public outcry against Erdogan’s government since it assumed power in 2002.

The nationwide unrest began as a local protest last week against plans to redevelop a park in Taksim Square, but after a heavy-handed police response, it quickly snowballed into broader demonstrations against what critics say is the government’s increasingly conservative and authoritarian agenda.