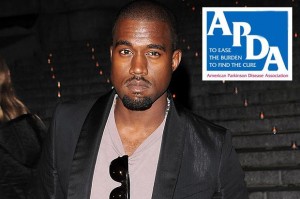 Probably the newest father in Hollywood, Kanye West has been massively criticized featuring a sick joke about Parkinson’s disease on one of his songs from his new album. The Good music CEO was branded “ignorant” and “distasteful” over the lyric which describes a “b**** shaking like Parkinson’s”. One of the world’s leading charities for the the degenerative illness came forward and blasterd Kanye for the offensive line. American Parkinson Disease Association VP Kathryn Whitford said: “We find these lyrics distasteful and the product of obvious ignorance.” In the lyrics from West’s long-awaited sixth studio album Yeezus, he raps: “A monster about to come alive again / Soon as I pull up and park the Benz / We get this b**** shaking like Parkinson’s.” Kanye West’s latest album stormed to the top of the iTunes chart yesterday several hours after its US release but now appears to have dropped from the top 10.