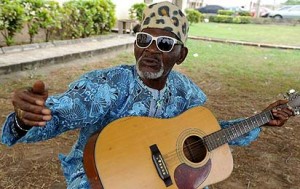 Fatai Rolling Dollar almost escaped being a period piece, but his style of music and its intrinsic worth which lasted the whole of his career stamped him for a juju performer.

Though humoured with an appreciable measure of patronage until he passed on at over 80 years of age, he unarguably belonged to a bygone era. At the end, he was left with one single hit number which was  the high point of each outing, and which represented an echo of the period to which he truly belonged.

Old “codgers” like us may fondly refer to that time as the “golden” period of Nigerian popular music. We would be right too in terms of the variety that was on tap as well as the performers who plied their trade in a variety of venues, from the streets to the clubs and music halls. Lagos, the Capital city, was the hub as it used to be for almost every endeavour, be it public demonstrations or popular sports, and most of the popular folk-music was rendered in Yoruba, the native language. There were orchestral ensembles dominated by Bobby Benson. And The All Stars which happily spawned other groups who played from his repertoire unabashedly, though some of them later developed their own style. The most notable among them was Dr. Victor Olaiya who can rightly claim to be of the same vintage with Fatai Rolling Dollar, though Olaiya was already a bandleader whilst Fatai was still bound as an apprentice to Julius Araba in the fifties.

Julius Araba was himself a protege of Akanbi Wright who took over from Tunde King as the first name among the early juju artistes. Akanbi Ege, as he was called, was a master guitarist and glorified under the nickname of “Seriki Onigita”, that is “The king of guitarists”. Julius Araba, who played in his band, took after him, and Fatai Rolling Dollar in turn, definitely continued that tradition of the mastery of the guitar after he left the Julius Araba Skiffie group.

The group broke up when Araba’s wife became a bona fide member. The boys simply could not abide that. So what had become probably the leading combo outfit became shrivelled to a shadow of itself. But its members who left the group hardly fared better individually. They failed to create a sound of their own, and could not emerge from the tag of “former Araba boys”. Among them was Fatai Rolling Dollar who also drifted for a while like the others. One good thing that came out of it all was the gradual emergence from his group of a gentleman by the name of Ebenezer Obey who was destined to become a star. It is one of the traits of good breeding evinced by the career of Fatai Rolling Dollar that he never made a big deal out of being the erstwhile leader of Ebenezer Obey, not even once, while he was himself in the shadows as a performer.

In the meantime, juju music had changed. It had become severely influenced by nuances introduced by musicians from other parts of the country. Notable among them was Theophilus Iwalokun from the Ilaje waterside, Isaac Dairo from the Ijesha hinterland and Sunny Ade by way of the stage music and its dramatic impact, and a number of others. In Lagos, Ayinde Bakare, who could be said to have succeeded Akanbi Wright, was closely challenged by Tunde Nightingale, and juju would never be the same again.

I have always been impressed by the disarming modesty which was a part of the charisma that oozed out of every pore of his being. He deserved every word of the teeming encomiums that have followed his demise. He was a rare one.

Early this month, there was the bewildering news that “herdsmen” had murdered no less than 17 people in Akough Village in the Guma Local Government area of Benue State. A more peaceful locality could hardly be imagined. It was an area of serene contentment inhabited by simple men and women who lived close to the earth and had a smile for every stranger.

That was my impression some three decades ago. That anyone could find it in his heart to lay a finger on these simple, peaceful people brought home to me the heartlessness of the evil that has been ravaging our country these past 40 months, or so.

There was a rush of realization in me that I found shocking in that I had not really grasped the enormity of the horror that the land has been exposed to for the simple reason that it had been happening far from me. But Akough Village reminded me of the proximity which humanity had bestowed on us all as creatures from the same Source of Creation.

Then I began to unroll the mental tissues that had obscured the actuality of what had been happening. This was not an onslaught by people who had mentioned any grief, any hurt, or cause for anger; these were not groups of people motivated by a religious zeal run riot, or seized by an uncontrollable political passion. The killers were simply described as “herdsmen”. In other descriptions, that was amplified to read “gunmen”, or “Fulani herdsmen.”

The impact of the shock of the Akough killings was intensified by the additional realization that one had actually glossed over the reports of earlier killings. And there had been several of them, some even more brutal with heavier casualties recorded of women and children in particular.

But it had usually been, “Oh, Boko Haram again”, to me. Now it was clear that there was a phenomenon that did not lend itself definitely to mere insurgency. Whoever heard of Fulani herdsmen with guns? Bows and arrows, maybe, but AK47? That is a bit beyond the accoutrement of shepherds and cattlemen.

I remembered what Pa Lot, that renowned and first among the statesmen of Benue/Plateau area,told me years ago about Fulani herdsmen and it still did not click. He had said, the herdsmen, following their itinerant way of life would wander around the luscious fields of the Plateau, and would leave considerable herds in several groups, whilst they drove the rest further afield for a few weeks.

While they were away, the local inhabitants would hold feasts with some of the animals left behind to the chagrin of the Fulani when they returned. When they inquired about the fate of their herds, the Tivi people especially, would blandly reply, “Mun-chi”— “We’ve eaten them.” There was not much the herdsmen could do since they were outnumbered by their hosts who added insult to deprivation, by giving the Fulani herdsmen the nickname of “Mun-chi.”

But that was decades ago and the animosity that the incident could have created cannot be expected to have lasted so long. So what beef (pardon the unintended pun) would the herdsmen be nursing at this time to provoke these horrendous outbursts?

But it continues, and the tempo is not lowered. As recently as this week, they struck again, this time in Zamfara. Official reports put the number of casualties at 32; the survivors stated that the figure was almost 60. There should not have been a single one, because there simply is no reason for the carnage. Just when the people of the North-west are beginning to entertain a sigh of relief, their counterparts to the Northwest are being put through a time of naked terror. The herdsmen who invaded Zamfara went about the streets crying out for help just to invite sympathizers who were then swiftly shot dead when they appeared. This is not funny. Boko Haram is one thing, but this is something else. Nothing should be allowed to overshadow it. It has to be squarely faced as a challenge on its own.

But how are we to achieve this? If we are all agreed that the people of Zamfara possess as one of their “inalienable rights”, the freedom to live a peaceful life in their pursuit of a legitimate entitlement to happiness, then we must quicken the minds of those who have been granted the privilege of being in government to their duty. Not only the people in Zamfara, and Bornu, and Yobe, but all the citizens of this country, Nigeria, need their welfare to be protected by those who have been given the power to do so.

However, have you noticed the current preoccupation of the members of the Peoples Democratic Party, the political party in power? They are busy sacking and re-instating State Governors with the nonchalance that might be attached to the cases of third-class clerks. They are preoccupied with the positioning and re-positioning of governors. They are neck-deep in the consideration of political offices within their party. In the meantime, the elderly members’ of the party, who should know better, are publicly stating why they should begin to campaign for the re-election of the President months before it is legal to do so, and are canvassing the return “by acclamation”, possibly, of all their elected members into political office.

What time have they got for the welfare and well-being of the citizens who put them in high office for that purpose? Look at them! Is this a political party or a circus troupe!