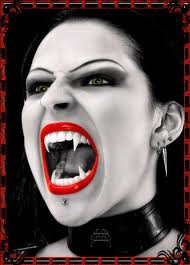 Or at least she does.

Caples, 45, is a real-life vampire who, drinks almost two liters of blood every month. She sucks the liquid from the backs of willing donors she meets at an occult and oddities store she runs near her home in Wilkes Barre, Penn.

“When I feed off of a person and drink their blood I feel stronger and healthier,” she said, according to the Mirror. “I know scientifically there’s not a lot nutrition in blood, but maybe there’s some value we haven’t discovered yet.”

Caples’ taste for blood began when she was 15, in the throes of her first kiss, and she got the urge to bite her boyfriend.

“It was my natural instinct and I liked the taste. I just got an urge and can’t really explain it. It’s never gone away,” she said, according to the Sun. “Needless to say though, he never kissed me again.”

Caples didn’t really go batty for blood until she started dating her ex-husband, Donald, 49, who, like her, was into the goth lifestyle. However, when they had their son, Alexi, 11, he decided to go cold turkey on the plasma.

“I gave up, so Julia didn’t have to. … She’s an amazing mother, and her children come first. She’d never let it stop her mothering her kids,” Donald Caples said