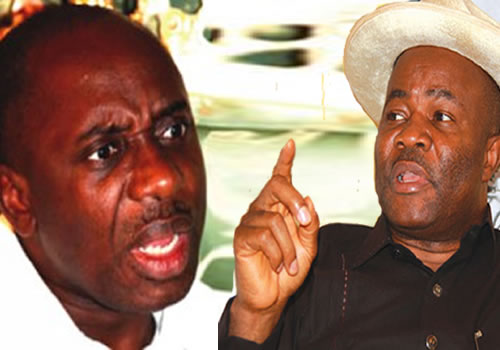 Feelers from yesterday’s meeting of the Peoples Democratic Party (PDP) Special National Convention in Abuja, indicates that embattled Governor of Rivers State and Chairman of the Nigeria Governors’ Forum, Chibuike Rotimi Amaechi, maybe recalled from the suspension slammed on him by the National Working Committee (NWC) of the party.

It was learnt that the decision to resolve the lingering crisis between Governor Amaechi and the ruling party became necessary in view of the party’s quest to close ranks and keep its members within the fold ahead of 2015 general elections.

Akwa Ibom State Governor and Chairman of PDP Governors’ Forum, Godswill Akpabio confirmed that moves were on to ensure that Amaechi and the party withdraw their cases from the court to allow for amicable resolution of their dispute.

According to Akpabio, “the reconciliation among the governors is already on going. If you noticed yesterday, we had almost all the governors of the PDP there even the recently recalled brother of mine and governor of Sokoto State attended the NEC meeting.”

He disclosed that almost all the PDP governors were present at the meeting and anyone who was not, had genuine excuse to be absent. He cited Governor Gabriel Suswam of Benue State who was on a Federal Government assignment to Hong-Kong in search of investors for the power sector.

“I think it is important to note that we are determined through the PDP Governors’ Forum to bring all our brothers together; the intention of our forum is not to lose a single governor, we want to increase the number. When I came in as a governor in 2007, we were almost 29 governors, but through various court cases and internal wrangling, the rank and file depleted until we are now 23. Under this new forum, we are now determined to increase the number” Akpabio noted.