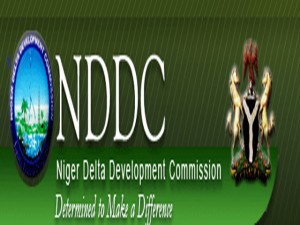 The House of Representatives Committee on the Niger Delta toured some states in the region inspecting projects being executed by the Commission, bringing to fore again, the N500 billion owed the Niger Delta Development Commission, NDDC, by the Federal Government.

By the Act establishing the Commission, the federal government is to contribute an equivalent of 15 percent of the total sum accruable to the nine oil producing state from the Federation Account for its operations. But the government had defaulted on this on several occasions. As at 2009, what had been denied the Commission was put at about N500 billion.

Chairman of the House Committee on NDCC, Hon Nicholas Mutu, who led members of his team round some member states in the region stressed the urgent need for the federal government to clear up the backlog for the effectiveness of the commission. For four days the lawmakers went through Rivers, Imo, Edo, Delta and Bayelsa states inspecting projects of the commission.

During the inspection, the committee observed the challenges posed by the terrain and the rain for construction related jobs. Mutu therefore pleaded with the Federal Government to ensure the funds owed the Commission be urgently released for it to achieve its targets expectations in the region.

“We now appreciate the need to commit more funds for the rapid development of the oil-rich region. What we have seen convinces us that the NDDC is making tremendous impact on the lives of the people. We will, therefore, urge the Federal Government to give the commission the financial muscle to be able to handle more big ticket projects.

“We commend the NDDC for working against these odds and still delivering on its mandate of fast-tracking the development of the Niger Delta. In the light of this, we call on the Federal Government to encourage the commission by releasing the over N500 billion it is owing on outstanding statutory allocations to it,” he said.

Also speaking, Mr Barry Mpigi, representing Tai/Eleme Federal Constituency who also sought greater funding for the commission, expressed the hope that the Petroleum Industry Bill when passed into law, would create avenue for additional fund to address challenges of under development in the region.

The lawmakers went round nine ongoing road projects. In Rivers state they inspected the 23.7 kilometer Owaza-Etche-Igwuruta road, the 18.9 kilometre Erema Ring road in Ogba/Egbema Ndoni Local Government Area. In Delta and Bayelsa they also visited the Koko-Ugheaye-Escrovos Road, which would link Delta to Ondo State, with 6 bridges; the 28-kilometer Patani-Angoloma Road in Delta State and the Sampou-Odoni Road in Bayelsa State.

In Imo State, they inspected the 17-kilometre Ishinweke-Onicha River Road in Ihite Ubuma LGA and the 18-kilometre Obokofia internal roads in Ohaji/Egbema LGA.