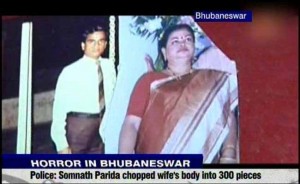 A retired army doctor was arrested on suspicion of murdering his wife after chopped parts of her body were found inside nearly two dozen steel containers in two iron boxes at their Indian home, police said on Saturday.

Police raided the house of Col. Somanath Parida (Rtd.), in the Nayapalli area on Friday night after some relatives went to meet the couple but did not find his wife, Usashri, at home. Suspecting foul play, they informed the police.

During a search, police stumbled upon two iron boxes in which the chopped body parts were found, placed in 22 steel containers, along with some dissection instruments.

Police also found a plastic bag inside a bathroom in which they suspect the leg bones of the dead woman were kept.

Although police suspect Parida killed his wife, he is yet to confess to the crime and claims that his wife committed suicide.

He however admitted that he cut the body into pieces because he wanted to keep the matter secret as the death would come as a shock to his children; a son and a daughter living abroad, and other family members.

Police suspect Parida killed his wife about a fortnight ago, chopped her body into small pieces and allegedly disposing of them over the past days.

According to the Assistant Commissioner of Police B.C. Mishra, Parida was arrested on the basis of prima facie evidence.

Investigation is on to ascertain the exact reason behind the alleged murder, he added.