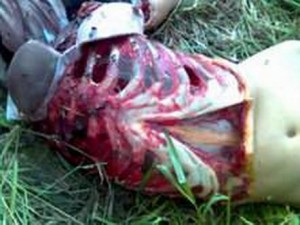 Ukana, a retired Warrant Officer 2, was said to have macheted his wife at about 1am Friday morning dismembering her body. Sources close to the family said their 18 year old son also sustained several machete cuts in an attempt to rescue his mother.

His son was reported to have raised an alarm which attracted neighbours in the night when his mother’s moan in agony, as she was being butchered by his father woke him up.

It was gathered that the couple have been engulfed in a running battle over the man’s resolve to formally marry his age long mistress, with the deceased strongly objected to the plans which had always led to fight in the house.

Several attempts made by family members and friends in resolving the crisis were said to have always hit a brick walk.

Sources say the remains of late Mrs Ukana have been deposited at a private mortuary in Igarra, while the accused Mr Shakede Ukana is currently in police custody.

Confirming the incident, the Edo State Police Public Relation Officer, ASP Moses Eguavoen said the command has started investigating the matter which he described as barbaric and unacceptable.