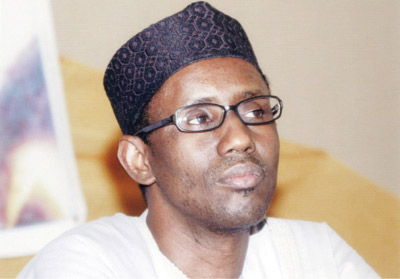 The Presidency on Monday took exception to a statement credited to the pioneer Chairman of the Economic and Financial Crimes Commission, Mallam Nuhu Ribadu, which likened Nigeria to a sinking ship under President Goodluck Jonathan’s watch.

It described the statement as reckless.

The Presidency’s position was contained in a terse statement by the Special Adviser to the President on Media and Publicity, Dr. Reuben Abati.

Ribadu had in his address delivered at a public lecture organised by the Students’ Representatives Council of the Ahmadu Bello University, Zaria, Kaduna State on Saturday,  described Nigeria’s democracy as one full of tyranny.

An assertion Abati described as false, hypocritical and self-serving.

The presidential spokesman said far from being tyrannical as Ribadu alleged, Jonathan would continue to strengthen institutions of democratic governance in Nigeria, uphold the fundamental human rights of all Nigerians including the youth, and protect their right to elect leaders in free, fair and credible elections.

The statement said the Presidency found it sad and deplorable that Ribadu had resorted to “shameless wolf-crying, the peddling of arrant falsehood and the denigration of the elected government of his fatherland in furtherance of his selfish quest for continued national political relevance after his wholesale rejection by Nigerian voters in 2011.”

Abati added, “It is unfortunate indeed that the once highly respected former EFCC Chairman has now taken to political prostitution and developed a penchant for irresponsible and reckless utterances aimed at improving the electoral fortunes of his new friends and ‘leader’, who he once famously denounced as a crook who is ‘not fit to hold public office.’

“There can be no doubt that nothing else but blind ambition for an office for which he is clearly unfit is driving Ribadu to infer that an administration led by a President, who welcomed him back to the country after his self-imposed exile, restored his rank in the Nigeria Police to save him from the shame of demotion and converted his dismissal from service to retirement, has now become tyrannical and anti-people.

“We take special note of his ingratitude.

“If Nuhu Ribadu wants to talk of tyranny, then he should talk of the days when he orchestrated the impeachment of governors with an illegitimate quorum of legislators who had been threatened by the EFCC under his watch.

“It beats the imagination that Nuhu Ribadu, a man who once presided over an  EFCC which in 2007 compiled a list of disqualified politicians aspiring for office without a court order or legal backing now has the guts to accuse the man under whom Nigeria has had the most credible elections in this Fourth Republic of being  the leader of a ‘sinking ship’”.