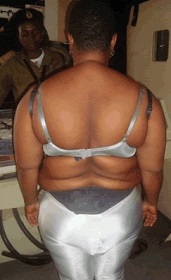 Mrs Jimoh Mulikat Adebukola and her six-year-old twins were caught at Lagos Airport carrying 4.050 kg of substance confirmed as cocaine. She concealed 3.350kg in almost every part of her body, including on her breast and underwear.

She also used her innocent six years old twins to carry about 700 grammes of the illicit drugs. Spokesman of the NDLEA, Mitchell Ofoyeju, quoted Mrs Jimoh as saying:

“I have problem of my children’s school fees. I have six children and I intend to give them good education. I also have younger ones and aged parents to take care of. They asked me to swallow the drugs, but I was afraid, that is why I packed them in my body.”

Now that she is going to prison, how will she pay the school fees? People really need to be wise!
TON