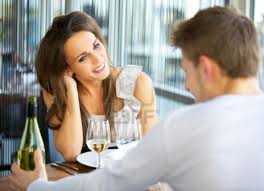 These red flags are based on true stories!

You’re officially single again. You’re going to bars and men are starting to notice you. It’s flattering, exciting and scary at the same time. A hot guy approaches and offers to buy you a drink. Your heart starts racing as you notice his sparkling eyes and wolf-like smile. The conversation flows and your chemistry is amazing.Could this be the next Mr. Right? It’s possible — but be on high alert. Don’t be snared by the seasoned hunter who’s ready to pounce on some fresh new meat. Here are 10 traps (based on true stories) that should set off the newly single woman’s fight or flight response:

He’s wearing a gold band on his fourth finger. You ask him point blank if he’s married and he emphatically denies. Upon further inquiry, you ask why he’s wearing the ring. He reaches for his phone and shows you pictures of his “deceased” parents. He whispers, “This is all I have to remember my parents who were happily married for 50 years.” You immediately feel guilty for mentioning the ring and are relieved when he changes the subject. It slips out later in conversation that he actually is married, and was hoping you’d “be cool” about it after getting to know him better. Lesson learned: If the tiger’s got stripes, he’s a tiger!

You’re having a great conversation with a cute guy at a restaurant bar. He offers to buy you a drink and you accept. The bartender asks if you’d like to start a tab. The generous man nods and proceeds to order some appetizers. You’re having a great time talking to this entertaining guy until the bill arrives. He reaches for his wallet and mutters, “I’m so sorry, I just realized that my credit card expired and I’m low on cash. Do you think you can cover this? I’ll get it next time!” Lesson learned: If the fox tricks you once, don’t let him do it again.

You’re standing in a crowded bar and a man initiates a conversation by asking how long you’ve been single. You proceed to tell him that it’s only been a few months. He snorts, “I’ve been divorced for 10 years, and it was all her fault. She’s a “psycho.” The name calling continues until you finally find a way to exit. Lesson learned: A venomous snake isn’t someone you want to tangle with.

You’re having a great time partying with a man you met at the bar. When you’re getting ready to leave, he asks if you’d like to go out with him the following evening. You agree and give him your phone number. He then drops the bomb, “Will you be able to pick me up?” You ask why and he explains, “I don’t have a license right now, cause I had a few too many DUIs.” Lesson learned: You don’t want a drunk monkey on your back.

Trap #5: He hasn’t spoken to his mother in years.

After ten minutes of talking about various subjects, you ask if he has a large family. He says he’s an only child and that his father passed away. You remark, “You must be very close with your mother.” He snaps, “I haven’t talked to her in seven years, she’s a witch.” Lesson learned: If a cub doesn’t love his mama bear, he won’t treat you well.

Trap #6: He’s married, but they haven’t slept together in years.

After small talk, he admits to being married. “Our marriage has been on the rocks for years. We sleep in separate bedrooms. I can’t even remember the last time we’ve had sex.” The words free flow out of his mouth, and you wonder if what he’s saying is really true. Lesson learned: Once a cheetah, always a cheetah.

Trap #7: He only talks about one subject — himself!?

A man begins a conversation by telling you that he has a boat, two homes and a fancy sports car. He offers to take you on a vacation, since he has “time shares everywhere.” He pulls out pictures of his three daughters and regales you with stories as to how talented they are. After 20 minutes, you realize he hasn’t asked you your name. Lesson learned: A gorilla beating his chest doesn’t need a mate, he needs a mirror.

Trap #8: He’s waiting for his inheritance.

You’re having a nice dialogue with a man. He’s single, good-looking and personable. You tell him that you’re in sales and inquire as to what he does for a living. He tells you that he works for his father. He proceeds to add,”I’m going to inherit a lot of money when he dies, and he’s pretty old.” Lesson learned: Don’t date someone who has no loyalty.

Trap #9: His lies are revealed on the web.

A confident guy approaches your table. He sits and easily chats with your group of friends. He tells you that he’s got a very cool job as an engineer with oil rigs and he used to be a professional baseball player. The girls are all impressed and he asks for your number to meet up later for a drink. You exchange information and he leaves. Your friend decides to Google his name and the first article that appears is a photo of his wife and two kids. Lesson learned: A coyote should cover his tracks.

Trap #10: He slept with every single woman in the neighborhood.

You’re flattered when a sexy man begins to hit on you. He tells you he’s attracted to your eyes and asks why he hasn’t seen you out at the bars before. After you play a little game of “who you know geography,” you realize he’s the guy that went out with one of your friends and cheated on her with another. Lesson learned: A leopard doesn’t change his spots.

Remember there are no hunting rules and regulations that men have to follow. If you’re an innocent lamb, it’s up to you to be prepared and on the lookout for the men who walk around in sheep’s clothing.