The World Health Organisation, WHO, has said 77 percent of women in Nigeria use skin-lightening products, the world’s highest percentage. The figure compares with 59 percent in Togo, and 27 percent in Senegal. 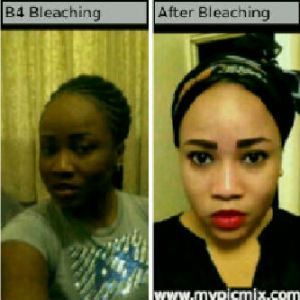 The WHO report said the reasons for this are varied but most people said they use skin-lighteners because they want “white skin”.

WHO also said skin bleaching comes with hazardous health consequences. The dangers associated with the use of toxic compounds for skin bleaching include, blood cancers such as leukemia and cancers of the liver and kidneys, as well as severe skin conditions. It said hardcore bleachers use illegal ointments containing toxins like mercury, a metal that blocks production of melanin, which gives the skin its colour, but can also be toxic.

The report said in many parts of Africa, lighter-skinned women are considered more beautiful and believed to be more successful and likely to find marriage. It also said it is not only women who are obsessed with bleaching their skins. Some men too are involved in the practice. 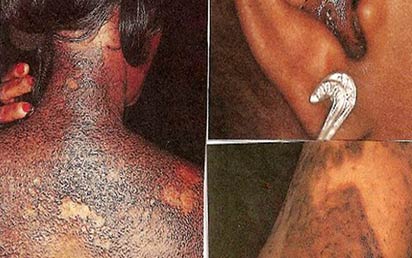 An extreme case of skin bleaching is shown above

WHO investigation said lightening creams are not effectively regulated in Nigeria where even roadside vendors sell tubes and plastic bags of powders and ointments from cardboard boxes stacked along sidewalks in market districts. Many of the tubes are unlabelled as to their actual ingredients.

Qatar based Al Jazeera also reported that business is booming for  shops selling skin-lightening products. A trader said, “About 90 percent of my clients come asking for skin whitening products,” adding “I sell it to them and give advice on what product is best for them and how to use them.”