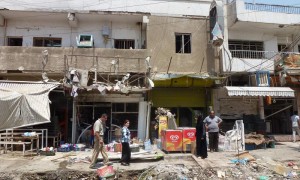 Two suicide bombers have attacked a tent packed with protesters in northern Iraq, during a protest by members of a group of ethnic minority Iraqi-Turkmen, killing at least eight people and wounding 51 others, officials said.

The attackers struck at around mid-day on Tuesday in the ethnically-mixed town of Tuz Khurmato, interim town mayor Talib al-Bayati told the AFP news agency.

A former deputy provincial governor and his two sons died in the attack.

The protesters had been rallying over poor security in the town, which is regularly hit with attacks.

Tuz Khurmato lies within a tract of territory that the Kurdish region of Northern Iraq wants to incorporate into its three-province region, over Baghdad’s objections.