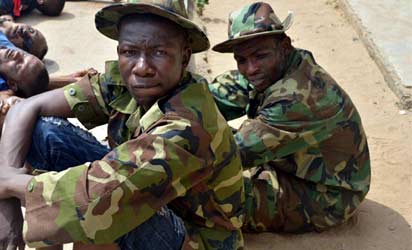 The suspects were killed in a shootout with the police at Agbara area of Ogun State.

Also, an Indian national, who was recently kidnapped, was rescued by men from SARS led by SP Abba Kyari.

The suspected kidnappers, among them a Chinese national, allegedly retire to their hideout in Ogun after each successful operation while pretending to be farmers.

The police detectives, who had been on their trail for nearly three weeks, engaged members of the gang in a gun battle at about 3:30am yesterday.

State Commissioner of Police, Umar Manko, while parading the deceased suspects at the command headquarters in Lagos yesterday, said the suspects are members of the 12 man gang of kidnappers who have been terrorizing innocent members of the public.