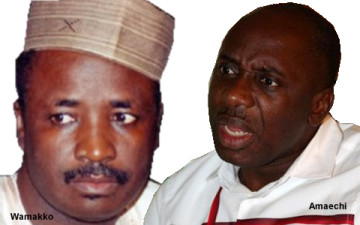 Sokoto State Governor, Aliyu Wamakko, Tuesday said he had been vindicated following the lifting of the suspension order slammed on him by the National Working Committee of the Peoples’ Democratic Party, PDP, a fortnight ago.

Even so, Wamakko appealed to the national leadership of the party to recall his Rivers counterpart, Rotimi Amaechi who was also suspended about a month ago.

Speaking in an interview with the Voice of America (VOA) Hausa Service monitored in Sokoto yesterday, Wamakko noted that the lifting of his suspension by the NWC was an indication that truth had prevailed in the end, as he had done nothing wrong to warrant the suspension.

He said: “Truth always triumphs over falsehood no matter what time it takes. I am not fighting anybody and I am not afraid to speak my mind because I believe truth will always prevail. We are talking about fairness and equity to all, so we are fighting injustice in the party.

“I am a Muslim, a northerner and a Nigerian. Thus, even if I am not the governor, these three things will always remain with me. I know that power is transient, so I am not scared of anything because I know that you can only be afraid of something if you are doing wrong,” Wamakko asserted.

He insisted that his call for the sack of the PDP national chairman, Bamanga Tukur, was in response to the yearnings of the party supporters in the state and also people with like minds in the PDP.

The governor observed that before Tukur’s tenure as PDP national chairman, the party had internal mechanisms to resolve its problems and disagreements away from public knowledge but lamented that this was no longer the case.

“In the past, before Tukur’s election as PDP national chairman, if we had any problem or disagreement in the party, we convened a meeting where all issues and problems were ironed out. We used to disagree and exchange words with one another during such meetings, but at the end of the day, we resolved the problem.

“In fact, such problems were kept secret without the knowledge of the public. But today, it is no longer so, you hear everything about PDP and its problems on the pages of newspapers and nothing is kept secret which is very sad.

“So the president (Goodluck Jonathan) as the leader of our party should rise up to the occasion and do the right thing to save the PDP from being destroyed,” Wamakko said.

While making an appeal on behalf of Amaechi, Wamakko stressed that doing so would enhance the unity of the party and ensure that all members are being treated on the basis of equity and mutual respect.

The governor thanked representatives of the state in the National Assembly and the State House of Assembly as well as party members in the state for their loyalty and support while his ordeal lasted.