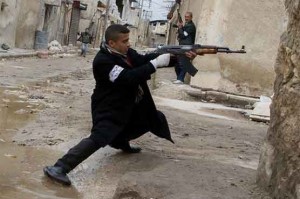 At least one member of Lebanon’s Hezbollah group has been killed overnight in clashes with Syrian rebels in Lebanon’s eastern border region.

Lebanese security sources reported the death on Sunday, saying that about 15 rebels had also been killed in the violence, east of Baalbek in the Bekaa Valley.

The conflict in Syria has been increasingly spilling over to its smaller neighbour, with deadly fighting shaking the northern Lebanese city of Tripoli, and rockets hitting the Bekaa Valley and Beirut’s southern suburbs.

Syrian rebels have said they will carry out attacks inside Lebanon in response to Hezbollah’s support for President Bashar al-Assad’s assault on Qusayr, a strategic town for rebel weapons supplies and fighters coming into Syria from Lebanon.