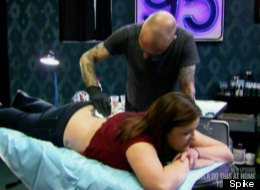 Kristina was looking to get a cover-up for her lower back ink on “Tattoo Nightmares.” She called the tattoo she had there now a “giant red cabbage,” and it wasn’t what she’d initially paid for. In fact, she said the tat ruined her life. It definitely ruined her relationship with her parents.

She got the tattoo when she was 17, begging her parents to sign the consent form. They agreed, and she thought she would get a little flower tattoo. What she didn’t know was that her parents had a deal with her tattoo artist.

“They told him that if her made it as ugly and as painful as possible, they would pay him double,” Kristina said. “They thought if they couldn’t stop me from doing it, they’d discourage me from ever getting another one.”

Instead, it destroyed her relationship with her parents. “I can’t trust them,” she said.

She got a Mexican-inspired tattoo to cover up the “red cabbage,” and upon seeing it, Kristina broke down in tears. She said that now she could finally move on from the anger and betrayal. She may even be able to forgive her parents now that the constant “reminder” of what they did is gone.

Executive producer SallyAnn Salsano told The Aquarian Weekly that those wild stories are what the show is about. She then teased that fans can expect some celebrity tattoo nightmares in the future. That is, if Spike TV picks the show up for a third season.