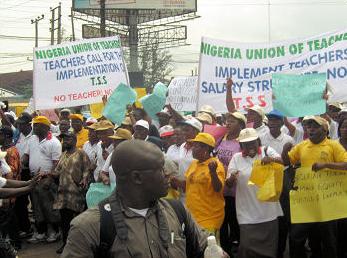 The Nigeria Union of Teachers (NUT) has berated Edo State Governor, Comrade Adams Oshiomhole for being dishonest in his dealings with teachers in his state saying by his actions, he has exhibited bad examples of labour practice and democratic governance.

It would be recalled that the union had on June 1, declared a “painful strike” in 11 states, including Edo over the non-payment of the 27.5 per cent Teachers’ Enhanced Salary Scale and N18,000 Minimum Wage.

But in a statement by the NUT National President, Michael Alogba, the union said it had suspended the strike action in Borno, Sokoto, Niger, Benue and Cross River states because their governments had matched the demands of the teachers.

It, however, added that the strike would continue in Edo, Ekiti, Ogun, Zamfara, Kogi and Ebonyi states because their governors had resisted “all industrial panacea put at their beck and call to return them to industrial stability and health since August 6, 2008.”

The union, which singled out Oshiomhole for knocks, said it was “piqued by the anti-labour practice” of the former Nigeria Labour Congress leader.

It further expressed disappointment that the governor did not respect a resolution to perfect the negotiation on June 11, even after he set up a committee to look into the accounts of both the state and local governments with a view to determining their finances to pay the allowance

NUT said, “It is disturbing to know that while the union approached the designated venue of negotiation on the rescheduled date, the unimaginable happened. The ‘Comrade’ Governor had directed that the union’s leadership be locked out for no just cause and effort to secure reason for the lock out could only attract the response of the official “by order from above.

“And, like a smart alec that he is, he did this without any signed agreement or document to be relied upon for enforcement in case of default of promise and or agreement.

“The greatest regret of NUT and perhaps the entire labour leadership in Edo State is that the ‘Comrade’ Governor, by his actions, is exhibiting bad examples of labour practice and democratic governance from which all civilised, responsible and fair minded governors should distance themselves.”

The NUT recalled that during Oshiomhole’s tenure as NLC President, the Academic Staff Union of Secondary Schools was “declared and treated as illegal and an unregistered and unregisterable trade union and the status of this organisation remained so for a long time until recently.”