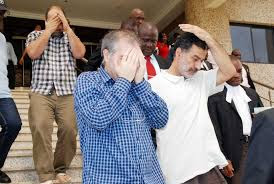 The Magistrate, Muyiwa Oyeyepo, struck out the case following an application brought before him by the Department of State Security Service (SSS) withdrawing the charges against co-owners of Amigo Supermarket, Abuja, Mustapha Darwish Fawaz and Talal Roda, Abdullah Tahini, and Hussain Nurudeen Kossdi.

According to the counsel to the SSS, Cliff Osagie, the Federal Government decided to withdraw the charges because the offence of terrorism proffered against the suspects was beyond the court’s jurisdiction.

Defence counsel, Ahmed Raji, did not object to the application.

The First Information Report (FIR) indicates that the suspects were remanded by the court on June 5 on charges bordering on conspiracy and importation of arms for terrorism contrary to Section 97 of the Penal Code and Anti Terrorism Act of 2011 respectively.