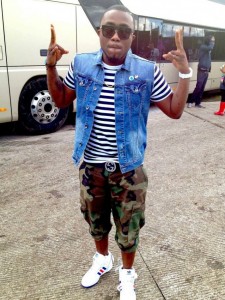 Your favorite aboki real names Panshak ‘Ice Prince‘ Zamani made a public announced on Thursday, September 7, 2013 that he would be dropping second album soon. The hot rapper titled this album – ‘Fire of Zamani‘, the follow up to his successful debut album ‘Everybody Likes Ice Prince‘.

Ice Prince also just premiered the video for one of his singles – ‘VIP’ at the Protea Hotels, Ikoyi, Lagos.

The rapper boasts that the new album ‘Fire of Zamani’ will feature major production from longtime producer and one time Jesse Jagz protege Malcom ‘Chopstix‘ Olagundoye.

Chopstix is the brain behind his already released first two singles from the album ‘VIP’ and ‘Gimme Dat‘ feat Burna Boy, Yung L and Olamide.

Other artistes that’ll feature on the album include Phyno, Wizkid and the GRIP Boiz.

According to an earlier interview with Toolz, Ice Prince explained that the album title was inspired by legendary singer 2face who had once called out the phrase on one of his past albums.