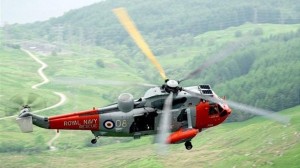 What started as a routine Navy exercise turned into a dramatic rescue for a helicopter crew called to airlift a sick baby to hospital from a remote peninsula.

A team from HMS Gannet was training in rescue techniques when its Sea King was called on to transport 16-week-old Max MacRaild to Yorkhill Children’s Hospital in Glasgow.

Max, from the Cowal Peninsula in Argyll and Bute, showed symptoms of meningitis and needed urgent treatment.

After picking up two on-call medics, the crew headed to Strachur, where they landed the helicopter on the village’s shinty pitch.

The doctors cared for Max as he was flown to hospital, where he made a full recovery. He has returned home to parents Rebecca and Neil following Friday’s rescue, which was captured by a Royal Navy photographer who happened to be on board.

Rebecca said: “I was so relieved to see the Royal Navy helicopter arriving, as I was initially told that the air ambulance from Dunoon Hospital was in Aberdeen and would be unavailable for more than three hours.

“At the time I was so worried about Max. I was also a bit surprised to see Royal Navy on the side of the helicopter as I didn’t know they provided such an invaluable service.

“I can only say that without the professionalism and support provided by the very kind members of the Royal Navy search and rescue crew and accompanying doctors, things might have turned out very differently.”

HMS Gannet is based at Prestwick in Ayrshire and its three Sea King helicopters carry out rescues across a large area across the west of Scotland, northern England and Northern Ireland.