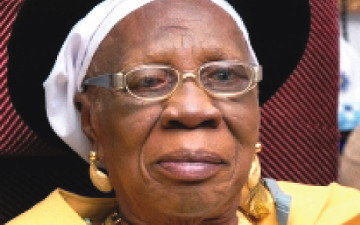 The controversy on who would succeed late Alhaja Abibatu Mogaji as President-General of the Association of Nigerian Market Women has been laid to rest with the appointment of her granddaughter – Folashade Tinubu-Ojo as the new Iyaloja General.

Shade, who was formally installed as the new President-General of the association on Wednesday, is the daughter of former Lagos State governor, Asiwaju Bola Tinubu.

At a well attended event presided over by Oba of Lagos Rilwan Akiolu, who was represented by his White Cap Chiefs at the residence of the late Abibatu Mogaji at Sunday Adigun, Alausa in Ikeja.

The white cap chiefs also brought the Oba’s staff to the installation ceremony as a symbol of the authority and authenticity of the title conferred on Tinubu-Ojo, who also doubles as the leader of the Lagos State Market Development Board.

The traditional rulers, who represented Oba Akiolu were the Ojon of Lagos, Chief Olubiyi Agoro; Obanikoro of Lagos, Soji Bembe; the Onisemo of Lagos and Kosoko of Lagos, among others.

In her response after the inauguration, Shade said her academic background coupled with the experience she gained while working with the late Mogaji, would assist her in discharging her duty effectively.

She said: “Managing the elderly women older than me will not be a problem since I have been working closely with Mama (the late Mogaji) and I have picked one or two leadership qualities from her.  I strongly believe God will give me the necessary wisdom and the grace to discharge my duty accordingly”.

“In general, I will advise all market men and women to make sure they quickly adapt themselves to the rules and regulations regarding the management of the markets.

“Their leaders must ensure that the environment is clean and more organised and they should play their role as they look unto government to create the enabling environment for them.”