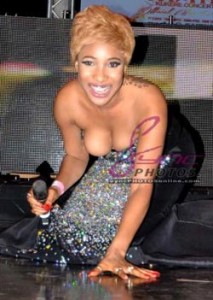 Controversial actress turned singer Tonto Dike hit the stage hard to perform at Iyanya’s Kukere Concert on the 9th of June 2013 in London only to hit the floor even harder moments later.

Tonto Dike has finally come forward to clear the air concerning this fall following rumours  she may have been ‘drunk’ or ‘ high’ or both before hitting the stage.

She tells Nollywood Movies Sky329 that her dress was the chief culprit followed by her shoes and then the ‘slippery’ floor.

“It was a big…well not a big fall and I managed it well. I fell because I had this very long dress, and  this very high shoe and a slippery ground, and because I wasn’t supposed to dance at my  first ‘coming out’. I had another outfit I could put on to really perform if I wanted to; it was my choice but I just came on and they played the song and I just had to dance and I slipped.

I made it fun really, I got up and danced, I didn’t want to disappoint anybody especially myself. When I went back stage, I was dancing my head off.