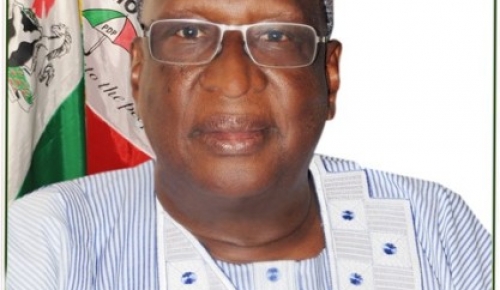 The National Chairman of the Peoples’ Democratic Party, PDP, Alhaji Bamanga Tukur, on Tuesday debunked media reports that President Goodluck Jonathan had asked him to resign.

Tukur spoke after a meeting of the party’s National Working Committee (NWC) with the President at the Presidential Villa in Abuja.

Tukur, however, told reporters that some members of the NWC whose elections did not follow the due process had been asked to resign from their offices.

According to Tukur, his office, that of the National Financial Secretary and the National Auditor were not affected by the directive.

Also, no affected is the Office of the National Secretary which was vacant due to litigation.

“The meeting is about regularising the family of PDP; there was an INEC’s observation that some of the members of the NWC were not properly elected, so it has to be regularised.

“Those who have not been elected will resign and they will go back. They will have the opportunity to regularise it.

“About eight people are affected while three people are not affected.

“The other eight people, all the deputies, and ex-officios and the rest of them whose election in the convention was not voted for are affected,” he stressed.