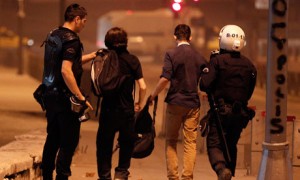 Twenty-two more people have been charged in Turkey over their alleged role in mass anti-government protests, accusing them of acting on behalf of a far-left “terrorist” group, lawyers said.

A court in the Ankara charged the 22 on Saturday and ordered them to be detained, the Contemporary Lawyers Association (CHD) said. Three others were released and placed under judicial supervision, it added.

The indictments bring to at least 46 the number of people facing charges over the demonstrations that have presented Prime Minister Recep Tayyip Erdogan and his government with the biggest challenge of its decade-old rule.

Thousands of people gathered in Taksim Square, Istanbul on Saturday night for another anti-government protest – the first in a week.

Riot police again fired water cannon to clear them, with the Reuters news agency reporting that protesters had been throwing red carnations at police before they opened fire.

Turkey has taken a tough stance against the tens of thousands of demonstrators who have been protesting since May 31 against the government, seen as increasingly authoritarian and conservative.

The protests, which have left at least four people dead and nearly 8,000 injured, have infuriated Erdogan and have earned Ankara criticism from the West, leading to a flare in tensions with Germany.

On Tuesday, police in Istanbul and Ankara arrested dozens of members of leftist groups in an operation that the Interior Minister Muammer Guler said had been planned for months but also targeted demonstrators.

“The operation, in the works for a year…. targeted the terrorist MLKP (Communist Marxist-Leninist Party), that also participated in Gezi Park demonstrations,” Guler said.

In Istanbul, a court on Friday charged 18 members of the small far-left Socialist Party of the Oppressed (ESP) who were among 90 detained in the same police sweep, accusing them of “belonging to a terrorist organisation” and “destroying public property”.

Police had also searched the offices of the Atilim newspaper and the Etkin news agency, both tied to the ESP group.

What began as a peaceful protest against plans to demolish Istanbul’s Gezi Park, one of the city’s last large green spots, turned violent on May 31 when police used tear gas and water cannon to disperse demonstrators.

Police moved in on June 15 to evacuate Gezi Park, the last stronghold of the anti-government protesters after a series of police crackdowns.

Erdogan on Saturday said in a speech in Samsun that protest-hit Brazil was a victim of the same conspiracy that he has blamed for demonstrations against his own rule.

“Those who failed in Turkey are now doing their best in Brazil,” he said.

Mass protests in Brazil were set off earlier this month by increases in public transport fares, and morphed into demands for more money spent on healthcare and other social services. The government in Brazil has moved quickly to announce a number of reforms to answer the demands. [Al Jazeera]