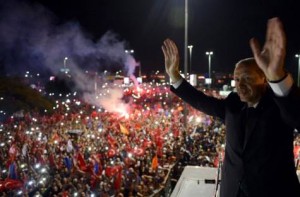 Turkey’s leader Recep Tayyip Erdogan braced on Friday for a showdown with angry protesters after loyalists rallied in his support, risking a potential escalation of a week of deadly unrest.

It seemed the whole country was against him as protests continue with protesters calling for his resignation despite apology by deputy PM Bulent Arinc, but his resolve to go ahead with his plans was strengthened as he was greeted by thousands of cheering supporters as he landed back in Istanbul from an overseas trip, the prime minister defied the protesters rallying against him and his conservative reforms as he fought to settle the sharpest challenge yet to his decade-long rule.

“I call for an immediate end to the demonstrations, which have lost their democratic credentials and turned into vandalism,” Erdogan said in a speech at Istanbul’s main airport.

He insisted he was the “servant” of all the people, but hinted that he would act against further defiance.

“We cannot turn a blind eye to anybody disturbing peace in the country and trying to hijack democracy,” he said.

The stakes rose on Friday for Turkey’s international image as Erdogan’s office said he was due to meet with European Union Enlargement Commissioner Stefan Fule – the EU pointman for relations with countries such as Turkey that aspire to join the bloc.
Turkey’s key strategic ally the United States and other Western powers have expressed concern about the police’s use of force.

Unrest broke out a week ago when police violently dispersed demonstrators opposed to the redevelopment of an Istanbul park. It then spread across the country, with riot cops firing tear gas and water cannon at stone-throwing protesters.

Erdogan withdrew police last Saturday from Istanbul’s Taksim Square, the epicentre of the protests, and demonstrators have returned there peacefully every day since,

A handful of squad cars passed cautiously overnight to check on the square amid a tense atmosphere, but there was so far no sign of police returning in force as concern turned to how Erdogan would settle the crisis if protests swelled again. In his homecoming speech he hinted darkly at further action.

“They ask us to withdraw the police. And then what? This is not a no man’s land.”

The square fell quiet as people withdrew to listen to Erdogan’s speech and it was calm as the sun rose, with the red and yellow flags left by opposition political groups fluttering in the breeze.

Supporters of Erdogan and his Islamic-leaning Justice and Development Party (AKP) party had stayed mainly silent as protests raged this week, but they cut loose on Friday, flocking to the airport in a sea of red and white Turkish flags to welcome him home.

“We will die for you, Erdogan,” they chanted, threatening the liberal demonstrators with the refrain: “Let us go and crush them all.” Flanked by his wife and top government ministers, the 59-year-old premier praised his supporters for their restraint in recent days, but added: “We’re all going to go home from here…. You’re not the type of people to bang pots and pans on the streets.”

Tens of thousands of protesters have packed the streets of Turkish cities calling for the premier’s resignation. But Erdogan said he was “chosen by the people” and would only relinquish power through elections.

He has been voted into office three times in a row since 2002 at the head of the AKP, amid strong economic growth. The nationwide unrest has left three people dead – two young protesters and a policeman, according to officials and doctors.