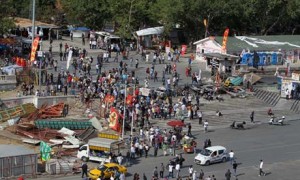 Turkish protesters have refused to vacate Istanbul’s Gezi Park despite a concession by Prime Minister Recep Tayyip Erdogan to halt the site’s redevelopment ahead of a court ruling after his strong words seemed not to move the protesters.

Saturday’s decision could see police again intervene in what is already a major showdown between the protesters and the government.

“We will continue our resistance in the face of any injustice and unfairness taking place in our country,” the Taksim Solidarity group, seen as most representative of the protesters, said in a statement on Saturday.

The decision came a day after Erdogan met with the group, along with artists and actors.

Erdogan had accepted to delay the redevelopment of Gezi Park pending a court decision on its legality. He also said a referendum would be held to determine the park’s fate even if the court ruled in favour of redevelopment.

Taksim Solidarity had initially responded coolly to the referendum idea and vowed to take Erdogan’s proposals to Gezi Park, where protesters held discussion forums into the night to come up with the joint response.

Earlier on Saturday, Abdullah Gul, Turkey’s president, wrote on Twitter that “everyone should now return home,” insisting “the channels for discussion and dialogue” have opened.

The onslaught by police on protesters however does not show the government’s readiness to become civil with protesters, as water cannons and tear gas were once again used overnight to disperse protesters who erected street barricades near Turkey’s parliament in the capital, Ankara.

Erdogan’s supporters were planning weekend pro-government demonstrations in Ankara and Istanbul, according to the AP news agency, with fears now being raised of an imminent clash between the two groups.

The protest over the park has exposed simmering tensions within the country between secularists and Erdogan’s Islamic-rooted government.

The protests have left three people dead and 5,000 injured, presenting the AKP with its biggest challenge in its decade-long rule, seen by many as increasingly authoritarian.

“Young people, you have remained there long enough and delivered your message…. Why are you staying?” Erdogan said in a speech broadcast live on television. “I hope it will be over by tonight.”

A peaceful sit-in to save Gezi Park’s 600 trees from being razed prompted a brutal police response on May 31, spiralling into nationwide demonstrations against Erdogan and the AKP.