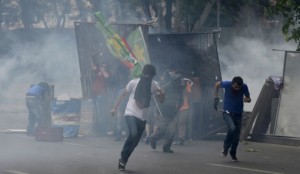 Protests continue in Turkey despite a recent apology on handling of protesters by the Deputy PM, Bulent Arinç, with Turkish police continuing the clampdown on protesters, firing tear gas and water cannon at crowds who joined mass demonstrations in Ankara, even as the government hit out at US expressions of concern over its handling of demonstrations.

The latest violence in days of angry protests erupted after thousands of union workers filled the central Kizilay square in the Turkish capital on Wednesday, urging Prime Minister Recep Tayyip Erdogan to resign.

Ambulances took away at least four people who collapsed as the gas blew into nearby restaurants, said an AFP news agency photographer at the scene.

Erdogan’s government earlier defended its democratic record after the United Nations, the United States and other Western powers voiced concern over allegations of police brutality.

Thousands of demonstrators also returned on Wednesday to Istanbul’s Taksim Square, the cradle of the unrest that erupted last week and has spread across Turkey.

Two people have been killed in the six days of unrest nationwide, doctors and officials said, while hundreds have been injured in protests police have sought to quell with tear gas, pepper spray and water cannons.

“Turkey is not a second-class democracy,” Davutoglu told Kerry in a phone call late on Tuesday, the diplomat said on condition of anonymity.

Davutoglu assured Kerry an investigation had begun into the police response, the ministry source said.

The diplomat said that the foreign minister told Kerry the protests were not “extraordinary”, comparing them to the Occupy Wall Street movement that sprang up in the United States in 2011.

Deputy Turkish Prime Minister Bulent Arinc apologised on Tuesday to those injured after police used tear gas and water cannon against the protesters and said the government had “learnt its lesson”, in comments that were welcomed by the White House.

Meanwhile, activists on Wednesday presented a list of demands they said could end days of anti-government demonstrations that have engulfed Turkey, as police detained dozens of people they accused of using social media to stoke the outpouring of anger.

At least 29 people were arrested in the coastal city of Izmir for encouraging rebellion over social media and tweeting “misleading and libellous information”, according to the state-run Anatolia news agency.

In a move to defuse the tension, the deputy prime minister met with a group whose attempt to prevent authorities from ripping up trees in Istanbul’s landmark Taksim Square has snowballed into nationwide protests against what demonstrators see as Prime Minister Recep Tayyip Erdogan’s increasingly authoritarian rule.

It demanded that officials, including governors and senior police officials, responsible for the violent crackdown be removed from office.

The protests appear to have developed spontaneously and remain leaderless.

The group of academics, architects and environmentalists, known as the “Taksim Solidarity Platform,” was formed to protect Taksim Square from development, including the rebuilding of an Ottoman army barracks and a shopping mall.