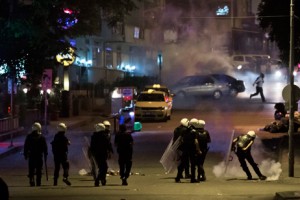 Istanbul’s Taksim Square, the focal point of protests in Turkey, has witnessed an uneasy calm, after a night of violent clashes that ended with demonstrators being ejected by the police.

Taksim Square became the cradle for anti-government protests, which were spawned following heavy-handed police action to end an environmental protest in nearby Gezi Park.

Police overnight also fired tear gas on protesters in Gezi Park, despite earlier assurances that police were only there to remove signs put up by opposition groups, and would not try to remove people camped there.

Ugur Ozcan, a protester, said: “The governor promised not to make a move against Gezi Park. But for nearly eight to 10 hours the police have been attacking, even in the park…. this is brutal.”

Huseyin Avni Mutlu, the Istanbul governor, said on Tuesday: “I would like to say again we won’t be intervening upon the young people staying in the park. After today’s operation in Taksim, those protesters in Gezi Park are staying in a very risky area. If they decide to remain in this risky area it will be risky for them.”

Gezi Park has been turned into a ramshackle settlement of tents by leftists, environmentalists, liberals, students and professionals who see the development plan as symptomatic of overbearing government.

The wider anti-government protests have cited Erdogan as an authoritarian ruler and some suspect him of ambitions to replace the secular republic with an Islamic order, something he denies.

Erdogan, however, says the protests, in which four people, including a policeman, have died, are engineered by vandals, terrorist elements and unnamed foreign forces.

Despite the demonstrations, he remains unrivalled as a leader in his AK Party, in parliament and on the streets.

His critics, who say conservative religious elements have won out over centrists in the AK Party, accuse him of inflaming the crisis with unyielding talk.

Erdogan, who denies accusations of authoritarian behaviour, however declared he would not yield.

“They say the prime minister is rough. Were we going to kneel down in front of these [people]?” Erdogan told a meeting of his AK Party’s parliamentary group on Tuesday as action to clear Taksim Square began.

Turkey’s Medical Association said that as of late Monday, 4,947 people had sought treatment in hospitals and voluntary infirmaries for injuries, ranging from cuts and burns to breathing difficulties from tear-gas inhalation, since the unrest in which police freely used tear gas and water cannon on protesters, began more than 10 days ago.