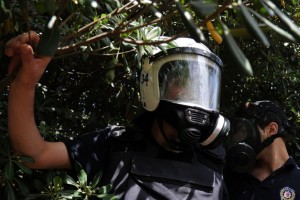 Hours after Turkey’s prime minister called for protesters at Gezi Park in Istanbul to disperse, Turkish police have entered the park, following similar action in nearby Taksim Square.

Dozens of riot police gathered on Tuesday on the fringes of the park, where environmental protests two weeks ago over a proposed redevelopment escalated into nationwide anti-government demonstrations following a police crackdown.

Earlier, police re-entered nearby Taksim Square in an effort to remove signs of “occupation” erected by protesters. They fired tear gas and water cannon while being pelted with petrol bombs, fireworks and stones by a small number of protesters.

In a speech to MPs, Prime Minister Recep Tayyip Erdogan said protesters still in Gezi Park should understand they were being used in a “dirty game” by anti-government groups.

“It’s not a place to be occupied…there is a big game being played using Gezi Park as an excuse,” he said.

“They are trying to damage the Turkish economy, shut down the growth of Turkey. I want the Gezi Park protesters to understand that they are being used in a dirty game.”

After days of blaming extremists and foreigners for provoking the protests, Erdogan extended his ire to “capitalist groups, interest groups and media groups”, adding that Gezi Park protesters were “being used openly by people who want to damage the economy, investment and tourism”.

Taksim Square has been at the centre of anti-government demonstrations over the past two weeks starting with environmentalists protesting to protect from redevelopment, a place they regard as the only green area remaining in the Turkish city.

The governor of Istanbul, Huseyin Avni Mutlu, said on Twitter that police were in Taksim Square only to remove banners and placards and the action was not targeting the removal of those people in the area. Banners from far-left groups were removed by the police.

A statement from Mutlu’s office said the aim of the intervention was to remove the banners of various groups in the square, which were making it look as though it was under “occupation”. This was “negatively affecting our country’s image in the eyes of the world opinion and leading to reaction from within the society”.

Mutlu later added that police would only remain in the square to prevent anyone surrounding the Ataturk Cultural Centre and Republic Monument.