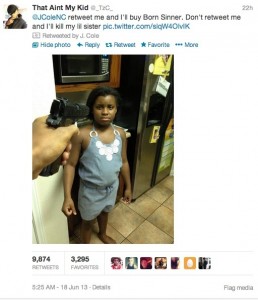 Some people are obviously crazy and out of their minds too.
Rapper J.Cole was threatened by a crazy fan who tweeted a photo of a little girl who had a gun pointed to her head, claiming he would shoot her if J.Cole refused to retweet him.

‘Born Sinner’ is J.Cole’s new album.
J.Cole who was frightened by the tweet, retweeted the message.