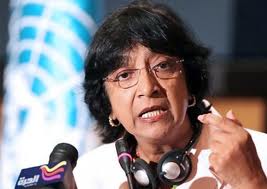 The bill, which was approved by Nigeria’s lawmakers last month but has yet to be signed into law by President Goodluck Jonathan, also states that any person involved in gay clubs or organisations “shall be liable to a term of 10 years imprisonment.” It is already illegal to have gay sex in the country and homosexuals say they often suffer abuse.

Navi Pillay was taking questions from around the world on the BBC’s World Have Your Say programme.

On May 30 2013, the House of Representatives endorsed a 14 years jail sentence with no option of fine for same sex couples. The House also placed a 10 years jail term for members of gay associations or those engaged in gay processions. The lawmakers resolved that any marriage or civil union entered into by persons of same gender is prohibited.

“Marriage or civil union entered between persons of same gender shall not be solemnised in any place of worship, either church or mosque or any place in Nigeria,” it is said in the bill.

The bill on same sex was introduced on the floor of the House last year. A public hearing on the matter was held in October, 2012.